A 60-year history of the Philippine peso packed into one happy graph: 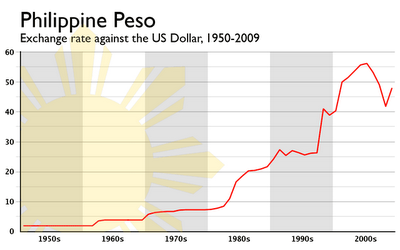 It's just really weird that I haven't seen a graph like this available anywhere else on the internet, because there's so much that can be learned from it. Look at how all the significant movements in the graph can be traced to events in Philippine history (which is, looking back at it, composed almost entirely of bad news):
And finally there's 2005 to the present, the only time in history that the Philippine peso has significantly strengthened in value, albeit with a sharp rebound in 2008. I'm at a loss to attribute this to any single event, but history has shown that movements of that scale do not happen without a reason.
Posted by Mike on Tuesday, January 20, 2009